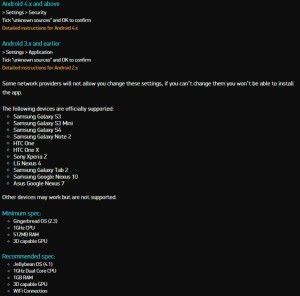 Update June 2013: It’s here at last! PKR have finally released their Android app. The first release of the app allows you to play both cash games and sit n gos and they reliably inform us that multi table tournaments are available soon. It features all of the 3d graphics and animations that has made PKR a hit with players all over the world. The only downside to this is that the app is BIG!!! It takes up 400 MB on your phone or tablet, so be sure to leave enough space on your device before you start the download. Click the button below to get the PKR Android app.

The picture on the right shows the compatibility and recommended settings for devices to run the app. I’ll have a full video review of the app on this page soon.

PKR have become the latest online poker site to dip their toes into the mobile waters, but Android users are left waiting for the moment, as they’ve gone with the iPad as their first mobile platform. The app only came out this week, and as I don’t have an iPad I haven’t played on it yet, but second hand information coming to me suggests it’s pretty good.

If you’re familiar with PKR then you’ll know that their software is pretty resource heavy. Even some older PCs struggle to run the complicated 3D game engine sometimes, so I was a bit wary that the game play would be very jerky on something with poorer processing power, like a phone or tablet. As you can see from PKR’s promotional screenshot, everything looks pretty good and the full range of animations seems to be there, but the screen seems to be a bit busy and this leads me to wonder if the app in it’s current form would be suitable for Android smartphones, which obviously have  a much smaller screen than the iPad. 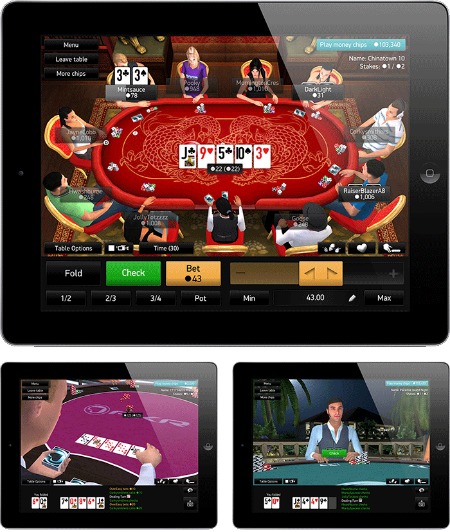 If they make a good job of the app, PKR could do very well out of mobile. It’s a brand that’s very popular with recreational players because of all the extra stuff like avatars and chip tricks, and it’s less popular with multi-tabling grinders. In reality when you’re on the go with your phone or chilling on the couch with your tablet, you’re only going to be playing one table and all of those extra little features and nice graphics make it a better overall experience than starting down at the usual boring overhead view that most sites have gone with for their apps.

As with most of the competition, PKR have started by only offering cash games on the app but as the tweet below shows, they are planning to get MTTs into the mix some time in the not too distant future. I’ll be keeping an eye out for the Android app and when it’s out, I’ll have a full review of it so keep an eye out!