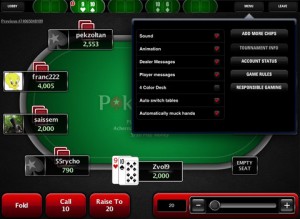 Most Android based devices have pretty small screens with the majority of them being mobile phones, and as you probably know if you’ve played poker on your Android, playing a single table looks like it pushes the limits of what can be managed on the small screens. Developers have had to be very clever in their use of space on the screen to make a playable game with usable controls where costly mis-clicks are a rarity.

Of course, many of us find playing a single table a little slow and boring when we’re at home playing on our PCs. Let’s face it, if you’re only playing about 20% of your hands (which you probably should be if you want to be a winning player!) and a standard table gets 80 hands per hour, then you’re only getting to see about 16 flops an hour, or one every four minutes which is pretty slow. Thankfully, most clients allow you to fire up as many tables as you can handle and if you feel like it, you can do your best ‘Johnny V’ impression (this will mean nothing to you if you haven’t see the 80’s movie Short Circuit) and play up to 24 tables at some sites.

If you’re playing poker on your Android device, you can’t even practically browse the internet while you’re single tabling, meaning the whole experience can seem pretty slow, especially if you only have a few minutes and you’re looking for some action. So what are the options for multitabling Android poker or speeding things up some other way? 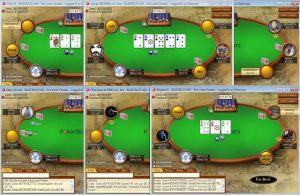 As I said, the typical Android screen is pretty small, so you’d imagine there’s very little chance of having multiple tables visible in their entirety on the screen which the clients usually refer to as ’tile mode’; however, Switch Poker have managed it. On Switch Poker you can play two tables at once on your mobile phone and up to four tables on a tablet PC. Though the cards and buttons are quite small, particularly for the mobile version, it works quite well and you’ll be able to get lot of hands in, instead of having to wait around like you would when single tabling. The only other option for conventional multi-tabling is a type of ‘cascade mode’,  where only one table is visible on the screen at a time and you can flick between them when it’s your turn to act and make your action whether it be a check, a bet or whatever. PokerStars have attempted this with their Android client which is out in a limited number of countries at the moment and while it is nice to be able to multi-table, it’s a very different experience to doing it on the PC. PokerStars tackles it by having a small button at the top of the screen that shows your hand at the other tables and pressing the button returns you to that table. The problem is that when you get above 2 tables it becomes quite difficult to concentrate and tables where it’s your turn to act are whipped onto the screen without warning making it very likely that you could check or fold by mistake. 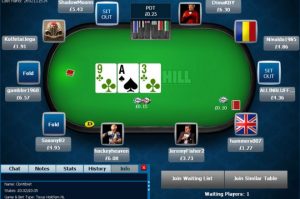 Another solution to getting more hands in is the use of player pools rather than individual tables. When you fold your hand at one table you’re immediately taken to a new table where a new hand starts with other players who have recently folded. You’ll probably recognise this idea from Full Tilt’s Rush Poker or PokerStars’ Zoom Poker. This is a perfect solution for devices with small screens as you only ever need one table visible and with some tricks by the software they can even keep you in the same seat for each hand. Just one operator is using this idea at the moment, Terminal Poker, and it works very well. The only problem is that Terminal Poker doesn’t have a huge amount of traffic at the moment, so there is still occasionally a bit of  a wait for a new hand to start. It’s likely over the next couple of years that all of the major poker rooms and networks will come up with their own fast poker product like Zoom Poker, and they will also more than likely migrate it to their Android client as well so before too long you’ll have your choice or sites to play 200 hands per hour on your Android phone.

If you want to know more about where to play poker on Android, have a look at our best android poker apps page.